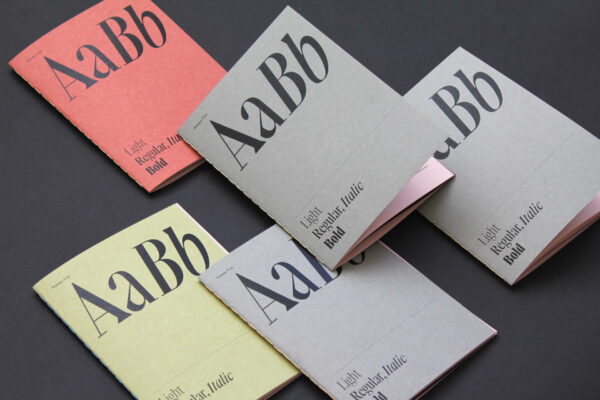 Plateau Five is a display typeface with an appearance mostly based on forms of the ­transitional period between Baroque and Neo-Classicism and has an underlying rigid structure. Its capital letters are heavy, the serifs ­prominent and the generally expressive tone that comes with italics is muted.

The typeface is based on the principle of even distribution, rooted in the social ideas that emerged with modernity during the 1920s in the western world. Applied to the typeface at hand this means that most letter widths of the Latin ­characters are optically equal.

Although patterning, i. e. defining grids for letters, might have been around since textura type to provide a less laborious production process of letter punches, the aspect of construction was well documented in the 18th century with the commission of a typeface by French royalty and rose to prominence between the two world wars with ideas by a. o. Theo Van Doesburg of De Stijl or Herbert Bayer of the Bauhaus. Plateau Five is constructed and theoretical as Schmidt Grotesque or alfabet, whereas a serif face asks for more compromise in the variety of used forms and must eventually fail to fulfil the intended outset. When designing Futura with the intention to avoid historicism and apply his utopian vision of typography, even Renner compromised by using ancient roman ­proportions for its ­capital letters. Plateau Five leaves its ­guiding ­principle behind for letters like the f, r or t, to account for readability and the ­preservation of a text face.

Plateau Five aims for a combination of the two seemingly antagonistic terms of ­individual expression ­embodied by ­calligraphy and the removal of ­signature by utilising rigid geometry.